Full Name
Jeh Johnson
Job Title
Partner
Company
Paul, Weiss, Rifkind, Wharton & Garrison LLP, and Former U.S. Secretary of Homeland Security
Speaker Bio
Jeh Johnson is a partner in the law firm of Paul, Weiss, Rifkind, Wharton & Garrison, LLP. He is the former Secretary of Homeland Security (2013-2017) and former General Counsel of the Department of Defense (2009-2012). Earlier in his career, Johnson was General Counsel of the Department of the Air Force (1998-2001), and an Assistant United States Attorney in the Southern District of New York (1989-1991). Johnson is also currently on the board of directors of Lockheed Martin, U.S. Steel, the Council on Foreign Relations, the 9/11 Memorial and Museum in New York City, the Center for a New American Security, and a trustee of Columbia University.

As Secretary of Homeland Security, Johnson was the head of the third largest cabinet department of the U.S. government, consisting of 230,000 personnel and 22 components, including TSA, Customs and Border Protection, Immigration and Customs Services, U.S Citizenship and Immigration Services, the Coast Guard, the Secret Service, and FEMA. Johnson's responsibilities as Secretary included counterterrorism, cybersecurity, aviation security, border security, port security, maritime security, protection of our national leaders, the detection of chemical, biological and nuclear threats to the homeland, and response to natural disasters. In three years as Secretary of DHS, Johnson is credited with management reform of the Department, which brought about a more centralized approach to decision-making in the areas of budgets, acquisition and overall policy. Johnson also raised employee morale across the Department, reflected in the September 2016 Federal Employee Viewpoint Survey.

As General Counsel of the Department of Defense, Johnson is credited with being the legal architect for the U.S. military’s counterterrorism efforts in the Obama Administration. In 2010, Johnson co-authored the report that paved the way for the repeal of the Don't Ask, Don't Tell by Congress later that year.

In private life Johnson is also a commentator on national and homeland security matters on ABC, CBS, NBC, PBS, MSNBC, CNN, FOX, CNBC, NPR, Bloomberg TV and other news networks. Johnson is the author of numerous op-eds in The Washington Post and The Hill, and since leaving office has testified before Congress five times on the subject of homeland security and cybersecurity.

Johnson is the 2021 recipient of The American Lawyer’s Lifetime Achievement Award. Johnson is the 2018 recipient of the Ronald Reagan Peace Through Strength Award, presented at the Reagan Presidential Library, for “contribut[ing] greatly to the defense of our nation,” and “guiding us through turbulent times with courage and wisdom.” He is also the recipient of 11 honorary degrees. Johnson has debated at both the Cambridge and Oxford Unions in England, and in November 2019 was conferred honorary life membership in the Cambridge Union. He has Doc#: US1:15392699v1 lectured at Westminster College, Harvard, Yale, and Georgetown law schools, the Harvard Kennedy School, the Yale School of Management, the National Defense University, Arizona State University, Kansas State University, American University, the National War College, all four U.S military academies, and at many other schools. In his final days as General Counsel of DoD, Johnson delivered an address at the Oxford Union entitled "How Will the War Against al Qaeda End?" The address received international attention and acclaim. On September 11, 2020, Johnson was the convocation speaker at Liberty University, where he spoke of the importance of character and morality in leadership.

Johnson is a graduate of Morehouse College (1979) and Columbia Law School (1982).
Speaking At
Lessons on Leadership 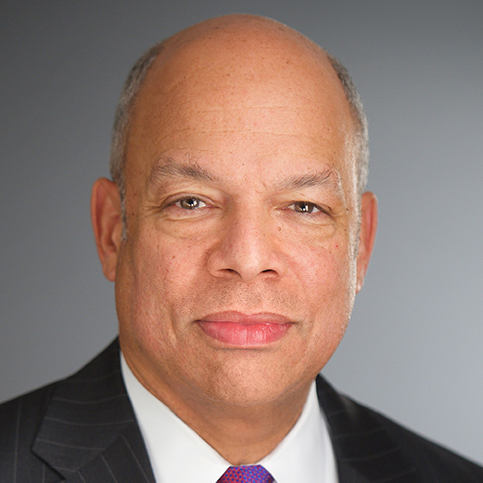